Douglas Hofstadter has always been fond of recursion and self-referential loops, the central topic of his acclaimed “Gödel, Escher and Bach” . In his 2007 book, “I am a strange loop”, Hofstadter goes even deeper into the idea that self-referential loops are the secret item that explains consciousness and self-awareness. The idea that consciousness is the result of our ability to look inside ourselves, and to model our selves in the world, is explored in this book, together with a number of related issues.

To Hofstadter, Gödel theorem, and the way Gödel has shown that any sufficiently complex mathematical system can be used to assert things about itself, is strongly related with our ability to reflect into our own selves, the phenomenon that, according to the author, creates consciousness. 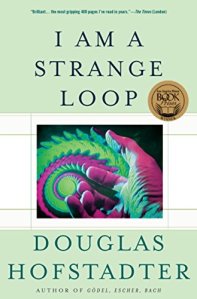 Hofstadter uses the terms “soul” and “consciousness” almost interchangeably, meaning that, to him, our soul and our consciousness – our inner light – are one and the same. Other animals may have souls, such as dogs or cats (but not mosquitoes) although “smaller” and less complex than ours. One of the strongest ideas of the book, much cherished by the author, is that your soul is mostly contained within your brain but is also present, at varying lower levels of fidelity, in the brains of other people that know you and that have models of you inside their own brains.

In the process of describing these ideas, Hofstadter also dispatches with a few “sacred cows”, such as the idea that “zombies” are possible, even in principle, the “inverted spectrum” conundrum (is your red the same as my red?) and the “impossible” – to him- idea of free will.